Pruning is easy, with the rule of thumb for established bush roses being to prune to one third original size in a frost-free period from mid-February to mid-March. Prune out any weak, weedy growth. Roses can be trimmed back after they finish flowering in November to stop wind-rock but the main pruning is done late-winter/early spring. 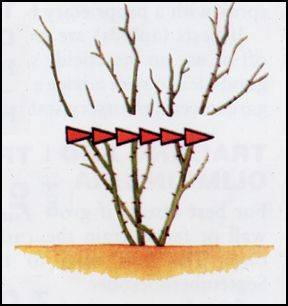 If planting bare-root bush roses between October and March, these roses will need an additional pruning (even though they look pruned). The method on these is to prune to around 8cm from the ground - this looks savage but it will encourage the roots to grow and produce a stronger plant in the long term. If you are worried about pruning, don't be! Pruning can be undertaken with secateurs or a hedge trimmer.