To be married for thirty years is such an achievement. This particular day must not be celebrated without a unique anniversary gift. Thirty years ago, you and your partner said 'yes' to the longest ride of life: marriage. With mostly ups and sometimes downs, you've supported each other at any time. This special day must be marked with an unusual wedding gift. We hope you'll adore the pearl anniversary rose just as much as we do.

The 30th anniversary is called the pearl anniversary. If your partner is as beautiful as a pearl, give her the attention and the gift she deserves. If you have been married to your partner in crime for 30 years, you have to come up with a special present. At World of Roses, we have all kinds of roses for special occasions, like anniversaries. The 30th anniversary is all about the pearl wedding. Our pink pearl anniversary rose has beautiful pink blush petals and blooms fantastic in borders, beddings and blooms from May to September.

The pearl anniversary rose is a super idea for a long term memory of an exceptional day. Do you remember that particular day, 30 years ago, when you and your love stepped into marriage? To help you celebrate this special day, the pearl anniversary rose of World of Roses helps you to remember this day as the most beautiful day of your lives. The fantastic pink petals form large pink flowers that contrast on the deep green foliage.

What do you give your partner to make an excellent gesture on your pearl wedding anniversary? You want to show your partner appreciation, love, and support for the past 30 years. You have shared half of your lives together, and you want to come up with a special gift. The pearl anniversary rose is the best pearl anniversary gift. This rose will be delivered bare-rooted, so the recipient has to plant the rose in the garden, for example, in the border. After a while, the rose bush starts growing and shows terrific colours, flowers and foliage. The rose reminds you of the lovely time you have had together, and the many more years you want to spend with your partner.

Buy the pearl anniversary rose online at World of Roses, and let your gift wrap and ship to anywhere in the United Kingdom. We securely pack and ship your order. Order online and give your partner the best present in the world. 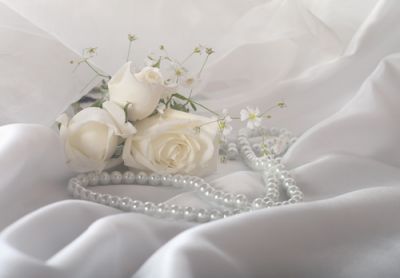